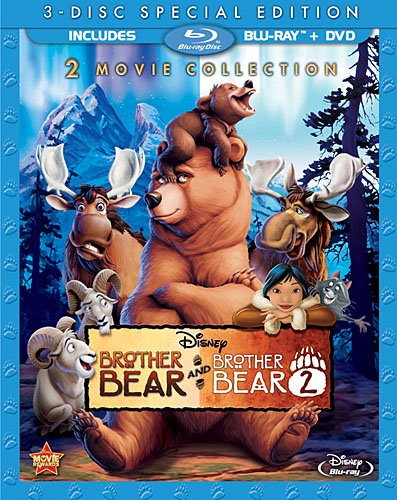 Good news! Brother Bear and Brother Bear 2 is now available on Blu-ray after a delay and missing the previous news release date. The movie is available as a combo pack that will include both movies.

According to the press release, the Blu-ray pack will contain the two films in 1080p, bonus contents like deleted songs and scenes, various making of videos and will be available on March 12.

Pre-order is available through amazon.com.

Synopsis: Two warm and wonderful Disney adventures arrive together for the first time ever in a Blu-ray Combo Pack! Families can share the heartwarming and hilarious tale of “Brother Bear” — the 2003 Academy Award® nominee for Best Animated Feature—and “Brother Bear 2” in one incredible 2-Movie Collection. Bring home an entire forest full of fun, complete with digitally restored high definition picture and sound.
After an impulsive boy named Kenai is magically transformed into a bear, he and his little brother bear, Koda, take a courageous (and often hilarious) journey to see the Northern Lights. Experience the excitement of these two fantastic films like never before on Disney Blu-ray March 12!