Two video games based on the story of Brother Bear were released. 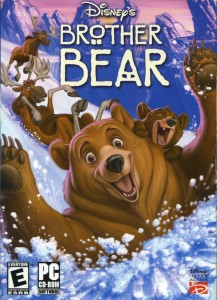 FUR-ocious friends face off against their foes in this action-packed, wilderness adventure of brotherhood, love and discovery. On your journey, you’ll confront the chilling thrills of the frosty tundra, the fiery fun of the Valley of Fire, and many other wild locales, as you try to keep one step ahead of your pursuer, the hunter Denahi. A FURiously fun adventure awaits those who are strong enough to BEAR the risk!

(From the back cover)

The Brother Bear PC Game was published by Disney Interactive Studios and was released on November 4, 2003, shortly after the theatrical release of the movie. In this game you play as Kenai after his transformation, and you wander through the different areas in the film. This is mostly an adventure game where you solve puzzles in order for you to proceed. The game is rated E and has an MSRP of $19.99. 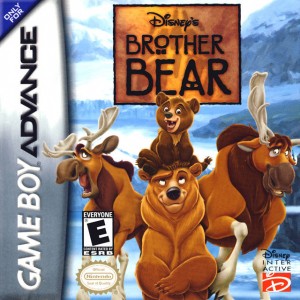 The World is Full of Magic & Adventure

Play as Kenai in this action-packed adventure through the majestic Northwest with that “raging ball of wild fur,” your friend Koda. Learn the meaning of brotherhood on your journey as you encounter glacial carvers, the Valley of Fire and compete in a wild race in the Ice Run. Are you bear enough to face the challenge?

The Brother Bear GBA game was developed by Vicarious Visions and published by Disney Interactive Studios. It was also released on November 4, 2003. The game is rated E and has an MSRP of $17.99.